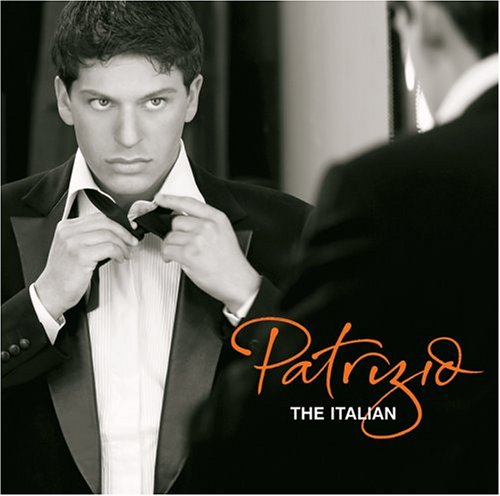 Style, sophistication, elegance...where can we find that old-school cool in our consumer culture of instantly disposable celebrity? Time to meet Patrizio Buanne. Tall, dark and handsome, perfectly groomed and impeccably dressed, the clean cut Italian with the rich baritone voice is an enigma. Inspired by the singers of yesteryear, Patrizio harks back to a time when a man would not dream of singing on stage in anything less than a suit, shoes, polished, clean-shaven, hair neatly brushed, with a dab of cologne behind the ears. Nothing strange about that, you might say. Except that Patrizio is only 26 years old - and hopelessly devoted to his art - romantic crooning.

Dean Martin, Paul Anka, Tom Jones, along with the traditional Italian singers - these are the men he idolizes. Unfashionable? Perhaps, on first impression. But as they say: style is temporary and class is permanent. "Less is more - those artists perform great melodies - it's so fantastic to go onstage performing beautiful melodies with an orchestra behind you."Raised in Naples, he moved to Vienna at the age of six when his father opened Austria's first pizzeria. But his fiercely patriotic father would play only Italian music at home. When he was 8 his parents bought him a guitar and at 11 years old Patrizio made his first public performance at a talent contest for schools. Patrizio then began to enter more talent competitions - and always won first prize. At the age of 17 Patrizio was invited to sing for the Pope in Poland, performing in front of his biggest audience yet - 85,000 people - which led to a recording contract shortly thereafter at age 17. However, tragedy soon followed when his beloved father died shortly after Patrizio's 17th birthday. But one thing made Patrizio determined to survive. "I had promised my father I would be a superstar and make my name - his name - famous. It is always music that reminds me of my father and makes me happy."In 1999 Patrizio took up on an uncle's offer to return to Italy and, after winning yet another talent show, found himself offered a job as a TV entertainer. Soon he was one of the most popular young faces on Italian television, hosting his own show in between studying languages at a university in Rome. But his dream was still to be a recording artist - and most of all to be successful in Great Britain and America.In 2003 Patrizio was introduced to music producer Christian Seitz. They both shared the same passion and vision for music, so bravely quitting his burgeoning TV career they went to work on the album - going into London's world famous Abbey Road studios with the Royal Philharmonic Orchestra to realize his dream. 18 months later the result is L'Italiano (The Italian), an album mixing traditional Neapolitan romance and singing tradition with Italian standards from the '50s and '60s - songs barely known outside of Italy but destined to become favorites for a new generation.To listen to Patrizio is to immerse yourself in the soundtrack of a world familiar from film and television - from Federico Fellini and Sophia Loren to The Godfather, Goodfellas, and The Sopranos. "My music is as Italian as pasta in an Italian kitchen," says Patrizio. "These songs are timeless classics. To me, crooning is more than a way of singing; it's a way of life! And I want to share that with a new audience."